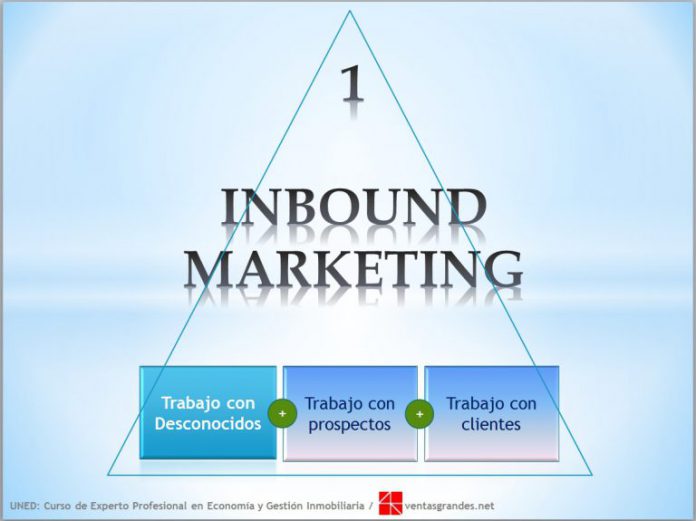 In the same image of the two previous postcards, next to the aspects of the Mk involved and the seven stages by which a prospect or potential client can pass through the process of the Inbound MK, some arrows appeared after each level, which emptied into a garbage can. We have to explain it. 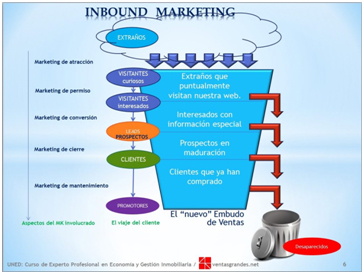 The Sales Funnel of the Inbound marketing

The concept of filter is multivocal in our language and I understand a number of meanings, some very different. So we'll have to explain which way it applies here. The simplest definition that best suits our purposes is found in the DRAE (1): (A filter is a ...) System of selection in a process according to previously established criteria. Definition of The Client Filter

In the process of the INBMK, to each of the stages through which it passes. The Buyer's Journey is reached after having passed a qualification or filtering process. But not all do it and many remain at the door of the next stage.

That is, of all the aspirants to go on to the next stage, only some of them achieve it -those who meet the requirements of admission- and the rest, or disappear from the system, or remain in it until another subprocess-the one of maturation in each stage-advances it. And that for each of the stages of the INBMK.

Composition of The Client Filter

So, we have to consider that in the filter concept, four other sub-concepts appear. 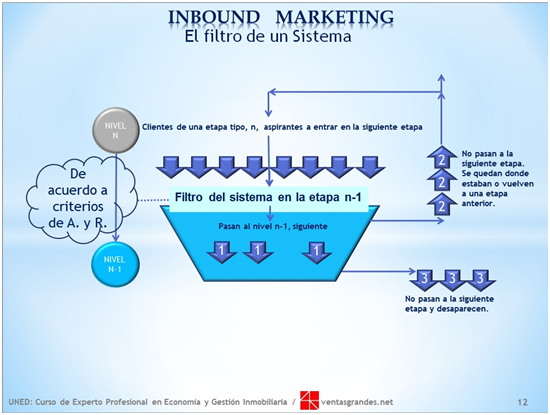 The filter type of an Inbound system

The first barrier of entry, in the system INBMK, is undesirable in almost all cases, because attracting, among all those who swarm through the network, the largest number of interested in our subject, is a priority. So here, at the beginning of this stage of attraction, there is no filter ... but its conceptual counterpart, a magnet. (2) Only, if we get exquisite, it could be said that the installation of our port of docking of our visitors -web or our own websites- is already in itself, a criterion of selection or filtering of the navigators of the network. p>

In this first moment certain aspects of our web make magnet to certain groups of sailors and some of them enter our world. (We will explain this, later.) Those visitors may or may not be repetitive. The figures that web experts give to those who visit our page, are a few seconds in it and never come back, they are very high. So until we have installed a metric to account for these elusive visitors, we will accept that they are the majority. Only some of them will come back other times and become repeat visitors.At that time, we rename the visitors with the word: regular visitors .

Towards the end of this stage, and based on a process of initial maturation of the prospects, some of them will respond to our stimuli (CTA, calls to action) and they will leave us their e-mail. I have not seen a specific name attributed to these repeat visitors who have given us permission to direct our emails to them, perhaps the one of mailboxes would be appropriate. The filter, in this case, the fact that they leave us or not their mail, voluntarily.

In a second stage of maturation, the prospects towards which a specific set of new stimuli has been directed ( Post, specific content, invitation to events, etc.) may or may not go to the next phase, - which corresponds to the CONVERT stage of the INBMK -. Not all habitual visitors, to whom we now direct with our permission, our emails, will mature to a state called lead (prospect). The more will remain in that previous state. But some of them will reach this state. The INBMK metrics suggest the criteria by which the client achieves that status. These criteria constitute the customer filter at this stage.

In a third stage, -which corresponds to the CLOSE stage of the INBMK - , to those leads or prospects , they are directed to a different stimulus campaign. The purpose of all of them is to put the potential customer in conditions of response to the purchase or not buy that we propose. This is the filter. The one who decides to buy is called a client and whoever rejects the offer at this time we keep it in the lead or potential client category. It could also be that the customer who now rejects the offered purchase disappears forever.

In the fourth stage - which corresponds to the DELEITAR stage of the INBMK - , the clients that they have bought can - they must- remain in our database and be taken care of by the company, from the moment following the completion of their purchase. Even in our real estate case, in which the repeated or crossed purchase, are not usual, the relationship with the client must be maintained in optimal conditions. Here at this stage, the fact that the client remains "alive" will depend on the stimuli that we offer from now on.

The filters of clients in Real Estate

In an old text our , we present in another way this idea of ​​filtering a system and we proposed a filter model for one of the basic tasks of the real estate agency: the Collection of Real Estate. We refer the interested reader to that model. (3)

When we make the adaptation to the real estate sector of all these INBMK techniques, it will be time to specify the necessary filters in our case.

I leave you, stay healthy! And do not forget to come back.

(1) DRAE (Dictionary of the Spanish Royal Academy of the Language): Filter .

(2) The magnet of prospects , which we will explain in detail in another upcoming postcard

(3) This is the Information in the world of Real Estate Agencies . Editorial UCI.2000. Spain. Currently sold out, except for a few copies in the author's hand.